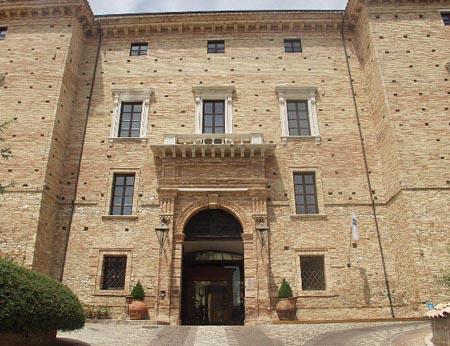 The ancient castle, as watchtower of the Lombards and outpost of Frederick II, it becomes home for noble families since the thirteenth century, and it will remain so through the D’Aquino, Gamba, Casamarte, the D’Avalos and, from 1870 to the present day, to the Chiola family.

One legend says that in Loreto Aprutino St. Thomas D’Aquino has stopped, returning from the Crusades and that staying in the Castle, the little Thomas has made the “miracle of the roses”. From what it is said, Thomas was used to fill his apron with bread taken from the house canteen, hiding from all, to bring it to poor people. The domestic noticing what was going on, he told everything to St. Thomas’ father. The latter then began to follow him and one day he stopped his son, asked him where he was going and what he was bringing in his apron and he very naturally replied that he was carrying roses and flowers and to prove that he was telling the truth, he widened the apron and indeed roses felt in the ground.